A tale of 2 installers

For version 1.3 of SumatraPDF I’ve created a new installer.
The old installer: 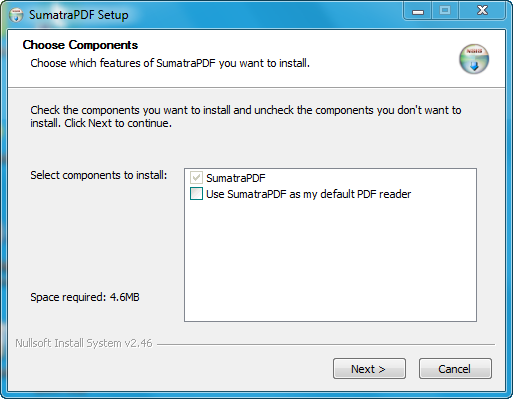 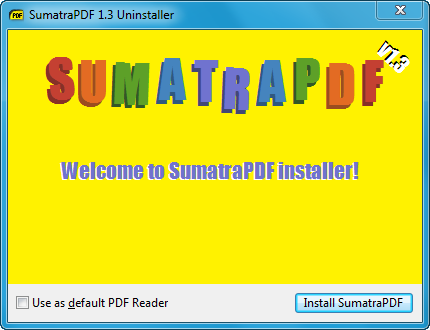 If you write Windows software, you need to provide an installer. Almost all installers are created by a tool (e.g. WiX, Nsis, Inno Setup and many others).
Apparently people think that writing an installer is so difficult that it has to be simplified with a tool.
I’m here to advocate another way: write your own installers, people.

It’s not that hard.

As everyone else, I did my installers with a tool. NSIS was my weapon of choice: it’s free, (relatively) easy to learn, (relatively well) documented and since other people used it, there are examples to learn from.
I used it in SumatraPDF, OpenDNS client and was reasonably happy with it. However, it wasn’t all roses.
NSIS is great if you don’t try to do anything that it doesn’t support out of the box. Once you stray outside the box, it’s hours spent trying to find an existing NSIS code to do what you want and if you’re unsuccessful, learning how to write code in NSIS’ awful macro language or write extension dlls.
Two issues I ran into were:
I realized that an installer doesn’t do anything complicated: it shows a window, writes a few registry keys a copies a few files. I figured that writing installer in C++ from scratch wouldn’t take more time that I’ve spent in total learning about NSIS.
I was right: it took me 9 days to write shippable version of Sumatra’s custom installer. Most of it was support code so writing future installers for my other software will be even faster since I’ll reuse most of the code.

I already had a functioning installer so why fix something that isn’t broken? For me, the reasons where:
Installer is the first thing a potential user of your application sees. What will be his first experience with your app?
Will it be terrible, like those installers that take half an hour to unpack a few files?
Will it be boring, just like most other installers?
Or will it be remarkable, unique, extra pleasant? An experience worth talking about to others?
Writer Joe Konrath stress the importance of a good book cover. An installer is the equivalent of a great book cover.
Writing a custom installer doesn’t guarantee it’ll be exceptional, but using NSIS guarantees that it’ll be boring, just like every other installer created with NSIS.
In SumatraPDF’s case, I’ve made an usability improvement: installation is a one-click affair (old installer required a few clicks).
On the whimsicality front, I’ve added a small startup animation, which shows the program letters one by one. It’s only a small thing, I haven’t spent much time on it, but the possibilities for interesting animations are endless: scrolling text, 3d objects rotating, fireworks, star fields etc. Old school demos and processing are a rich source of inspiration for possible effects.
If you want to learn how a custom installer is done, the source is out there…
Written on Feb 6 2011. Topics: sumatra, programming.
home
Found a mistake, have a comment? Let me know.