VisualAck is like grep (or ack), except faster and with UI.
Requirements: Mac OS X 10.5 or greater. 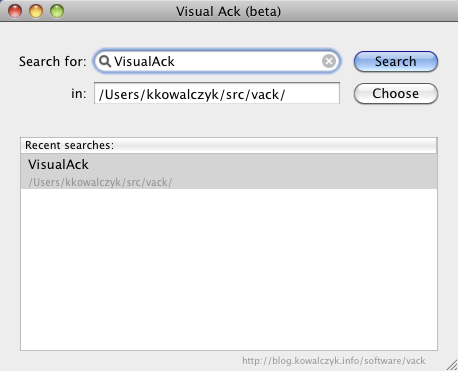 vack [OPTIONS] PATTERN [FILE/DIRECTORY]
Available options:
Examples:
Note: you must run VisualAck at least once in order for the vack executable to be added to $PATH.
How is VisualAck different than grep?
For one, it has both command-line version and UI.
In behavior, VisualAck is modelled after ack (hence the name), except it's written as a native Cocoa application (as opposed to a perl script).
Two main differences from grep are:
VisualAck aims to support the same features as ack, but that reality is still far away. At the moment it only supports the basic options.
Written on Jul 28 2019.
home
Found a mistake, have a comment? Let me know.